Our take on European TF’s.

Not for the first time, Romania are the Olympic year European Team Champions. It’s something of a habit for them. Meanwhile, your writers are basking in the glow of getting the top four right.

Stoi! mentioned in our predictions that one of the only certainties in the sport is Octavian Belu being smarter than everyone else. That remains true.

Romania were less impressive today than in qualifying, having counted a fall from the otherwise inhumanly reliable Larisa Iordache. But they showed they were no one-off, and it remains noteworthy that their prelims score was only a point less than what the US tallied to win in Tokyo.

Comparing scores from different competitions is at best a highly inexact science. Nonetheless, it gives us an idea what ball park the Romanians are now playing in, particularly as they played it very safe with Izbasa in prelims and Bulimar being underpar on floor.

Mother Russia gave us the usual mixture of the sublime and ridiculous. Those who managed to stay on beam were beautiful, but were channeling Bridget Sloan with the utter failure to connect anything. CV matters, comrades.

The jury’s still out on Sidorova, and Paseka is useless for London without an Amanar – though we all knew that anyway.

Komova was Komova, as she is and always will be. The other two could be forgiven on beam: Sidorova had a very hard task going up first, and Grishina did ok. Vika has neither of those excuses.

Given Russia’s horrendous start, it’s a surprise in some ways that the top two ended up within a point of each other. Granted, Iordache fell from beam, but it wasn’t the costliest mistake in the world. She came out of it with her D score intact.

Romania perhaps had the best of the judging. We’re thinking particularly of Raluca Haidu’s bars, which looked to be almost a point too high.

Our good friend Danafan from TAAF scored it, and had her at 13.2.

Arguably, this overscore was the difference between the two teams. But nonetheless, Romania looked to be the better of the two teams, whether the numbers add up or not. They were twice as convincing as Russia. You simply can’t piss away 3-4 points on beam by being half arsed, and then expect to win. Especially not against Romania. Even if you are light years ahead of the rest of the world on bars. It was heartening to watch the fightback, though.

And we couldn’t talk about fightback without giving special mention to Mustafina.

Stoi! had already advised our readership that news of her demise has been greatly exaggerated. And so it was. The more we think about it, the clearer it becomes that Aliya basically did all that could be expected of her aside from a couple of missed swings on bars in prelims. Today’s set made it more than clear that she remains a leading contender for the Olympic title on that event.

Floor was, of course, a bust. She didn’t properly control a single landing today, and if anything we’re shocked that she did the first pass so nicely in prelims. However, this is no great shock given that she simply isn’t ready on the event. Nothing we have seen from her so far suggests otherwise. The only reason she had to do it is because the coaches chose to send an experimental team, rather than one designed to maximize the scores. So, Paseka got the 5th spot rather than Belokobylskaya. Stoi! has supported and continues to support this approach; Paseka seemed like a bit of a waste of a spot but at least she has some chance of being in London. So it made sense.

However, it also resulted in Aliya having to take one for the team. The fact that she did this and came out smiling by the end perhaps tells us something about her mindset. Don’t just take our word for it, look at her rather satisfied expression on the podium. This picture doesn’t fully convey it, but it’s the best we could find. 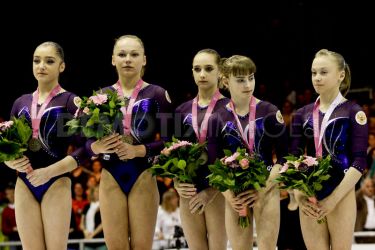 And we all know she doesn’t usually approve of silver.

We don’t presume to tell our readers what shape Aliya will be in by the Olympics. She’s on a steep recovery curve and who knows, perhaps she has been rushed back too soon. This all makes it very difficult to make predictions. All we will say is this: twelve weeks is a long time. Nobody knows this better than a woman who is 28 weeks gone and due to spawn right in the middle of London team finals. Yes, really. Planned that one well, no?

As predicted, the battle for bronze was won by the team who hit best, rather than prettiest: Italy. GB had a good old fashioned beam meltdown, with the only hit routine coming from Stoi! favourite Danusia Francis. Because she’s a one eventer in a pretty deep team, we had been thinking of her as a possibly unaffordable luxury for London. Then she goes and reminds us that she’s the only one who can be trusted on the team’s weak apparatus. It would be nice to see her go above-14 more often, but she remains a selectors headache. In a good way.

France also fell all over the place, with Dufournet arguably lucky that her mistakes weren’t more harshly penalized. That Gienger must’ve hurt.

And lastly, we still can’t really get our heads round what happened to the Germans.