It’s that time of year again- Euros are coming! They’ll be held in Brussels from 9th-13th May, for the WAG. Qualifications, TFs and EFs. No AA.

Stoi! has focused more on the US than anyone else recently, which made sense as they’ve been doing a flurry of competitions. Things have gone quiet for a few weeks stateside though- not much doing there until US Classic. Happily for gymfans, this coincides with the build up to Euros. So that’s what we’ll be mainly covering for the next few weeks. We’ll do some specific prediction threads closer to the time, when we know who’s actually going to be there. Before that though, we’re going to have a look at some of the leading teams and perhaps athletes, as and when the mood takes us. Our first preview is of Romania.

They had a torrid time in 2010. Losing their team title to Russia was perhaps acceptable in the circumstances, but being beaten for silver by the British absolutely wasn’t. It was a dreadful result for them. 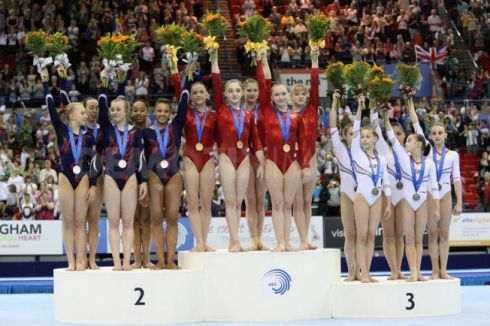 We don’t expect the same thing to happen this time. Despite their worst showing at worlds for many years, Romania are on the up. Whilst Russia are probably the favourites, the Romanians are in a different league to the other contenders. Which is usually the case. It’s likely therefore that they’ll be in a two way battle for gold with Mother Russia.

Iordache will be the first name on the teamsheet. She’s Romania’s best gymnast at the moment, and as a new senior she needs the experience. They were so desperate to get her out there, they even sent her to Scam to be screwed (and indeed she was). As their best AAer in a long time, we expect her to do all four events in TFs. There’s a good chance she’ll be the ‘unofficial’ AA champion, and she’s the leading contender for the beam title too. At the moment she only vaults a DTY, but there’ve been hints about an Amanar. If she does unveil that, she’ll have the highest 4 event difficulty score in the world- she’s competitive even with just a DTY.

Granny Ponor continues to grow old disgracefully, and will get a 3 event berth unless she’s injured. As she has no second vault she won’t compete for individual honours there, but is a potential medallist on beam and floor. Romania’s floor rotation is potentially frighteningly good, actually. Most of them can dance a bit too. We weren’t too keen on her new floor in Doha, as previously discussed, but expect her to inject a bit of life into it when occasion requires. Cata’s always had the big match temperament, and it’s not going to start deserting her now after two quads.

Look for a big score on beam. Here she is taking the title in Doha recently:

Romania took the maximum two beam medals at Euros in both 2009 and 2010: look for them to do that again this time. They might even get a 1-2, if Mother Russia go headcase. Which would come as a shock to nobody.

Bronwyn’s favourite Diana Bulimar has been doing great things lately. She’s making a good case for herself on bars, floor and possibly beam, and we expect her to be in Brussels. As usual, Romania can’t afford to leave out anyone who’s likely to break 14 on bars. So she’s going. She just isn’t quite as much of a lock as the first two.

Another athlete whose bars are her ticket might, bizarrely, be Chelaru. She’s now an AAer, and it seems like she’s actually in the running to do the event in London, if only prelims. Obviously, she isn’t actually any good.

We didn’t need to see her at Scam to know that, but she was kind enough to prove it to us anyway. However, she’s relatively consistent. Belu is nothing if not savvy, and might well consider that a solidly reliable 13.5 is better than risking an athlete who can score much higher if she hits, but who doesn’t. Yes Racea and Haidu, we’re talking to you. Smacktavian has form for favouring the consistently mediocre but bankable. He won’t have been pleased when his bars specialists, such as they were, managed to cost the team the bronze in Tokyo. They’d actually have been better off using Chelaru, who might well have got them the bronze if she’d been used- that isn’t a lesson that will have been forgotten.

So we won’t be at all surprised if Diana gets the nod, although there’s room for two of the three on the team anyway if Izbasa’s still injured. Chelaru is, of course, always good for a decent floor and vault score. So it’s bizarre to think we might not see her on either. She trained a vile Amanar last year, no doubt with 2012 in mind. Let’s see what she can bring to the table. On balance, we think she’s going.

The big question mark hanging over the team at the moment is reigning European vault and floor champion, Izbasa Queen Of Bleach. Fresh from an injury a few weeks back, we’re not sure where she’s up to. She too has been training bars this year, possibly with a view to doing the AA in London.  Here’s a report from Romanian TV just after her injury.

We didn’t understand a word of it, but even if we had, we suspect cards will be kept close to chest for a bit. It remains to be see how healthy Sandra will be, and what capacity she might be there in. If fully healthy, she’d probably be the leading contender for vault and floor. We could see her doing just about any combination of events in TFs, too. 2011 brought rumours of her training a Cheng vault for London, and her stunning Lopez makes us think she could add at least a half twist to it. But in view of the injury, we don’t expect to see any lower limb battering upgrades just yet.