Notice that Uzbekistan is sending Luisa Galiulina rather than Stoi! favorite Daria Elizarova. This is the second Olympics that Elizarova gets the shaft, and this time she even swapped countries for a better chance to qualify.

Does my strongly biased self  think that crossing the border should snag her an automatic Olympic berth? Of course not. But I feel that she’s a better gymnast than Galiulina. Not that her competition results justify this. She was fabulous during the qualification round at the recent Challenger Cup in Ghent (she qualified to 3 finals), but bombed when it actually mattered. I don’t think this helped her cause.

We’re devastated, and assuming she is as well.

Something about Egypt qualifying 2 gymnasts to Uzbekistan’s 1 leaves a skanky taste in our mouths; equivalent to snarfing down a can of rotten tuna and washing it down with  a bottle of kaopektate.

There’s a shit ton of gymnastics coverage going on.

Since I work from my computer, I’m on the fence about watching online live coverage/checking quick hits  vs. patiently waiting for taped TV coverage where I can curl up with a box of trashy wine and a bag of pizza rolls.

It’s times like these that I ask myself, “What would Kim Kelly do?” 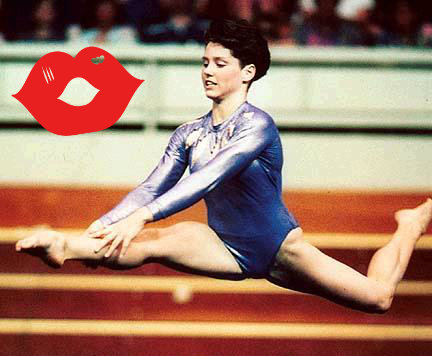 I’m thinking that a handful of these girls will make All-Around finals. Several chances for event finals berths.

I’m hoping that Pena will crank her scary Produnova without knocking her teeth out with her knees, and Millousi is my very-dark-horse for beam finals. I’m banking on Steingruber and Maksyuta for vault finals.

Our friend MRR from WWGym suggests that, “this could be more a psychological ploy to get her to work her behind off for the next couple of weeks than it is a deliberate threat to keep her off the team. ”

I see that my co-writer has a draft about He’s addition to the team, so I won’t say much about it.

But I will say that hitting one bars routine in the past year shouldn’t get you a free ride, Olympic champ or not.

Below is her strongest effort of the year. It will get her a big score in London, but I don’t see it getting her on the podium with the likes of Tweddle, Mustafina, Komova, Douglas, or Jinnan.

Labored, a bit of a shadow of her former self. But this is what puberty and more time at the buffet than at the gym will do to a still-developing body.

Somewhat humiliating that Downie has to be caught dead modeling this hideous frock when she’s not even on the team. But good for her that she’ll never have to actually wear it again.

Komova, Pak from the back. 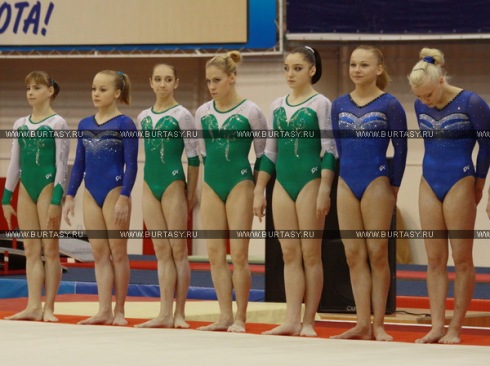 Russia always has the tendency to choose leotards that flatter those with tiny frames (Grishina/Komova), but makes those who have actually gone through puberty look a little boxy.

I like both designs -but  see through mesh neck lines & sleeves (Inshina, Paseka, Nabieva) are always a recipe for disaster.

I just hope these girls are stocking up on strapless bras or nipple tape.

I call the number below “Summatime in Deva”, where apparently it’s too hot to be bothered to wear something that covers your labia.

Here’s Aly covered in more crystals than a coked up Lindsay Lohan at a jewelery auction :

I can’t imagine it’s easy to jump, leap, or flip in that thing.

I imagine it’ll stay in the showroom. If the US wears anything but pink I’ll die of shock.